News from our Emmanuelle Hewson 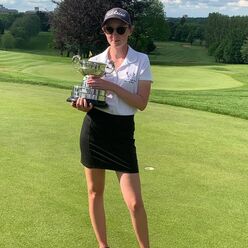 What an exciting summer it has been!!! On the 9th of May I was able to return home from my first year of college in the United States at Northern Kentucky University and I couldn’t wait to start competing again. After serving my time in quarantine and doing some training to adjust to British style courses again, I was ready to play in my first event, the Hertfordshire Ladies County Championship held at Knebworth Golf club. My expectations going into this tournament were simply to have fun and see what happens, as Covid had made golf in the States pretty difficult, and I was in the middle of sorting some swing issues out with my coach Barney Puttick. However, much to my delight with the sun shining in the afternoon of the 6th of June I was preparing to tee it up in the final. I went on to win the County Championship, making me the first to do so at Mid-Herts since the likes of Lucy Williams. Being able to compete and represent Mid-Herts was an absolute honour and I want to thank Lady Captain Gill Burn for the wonderful gift and reception I received at the club the following Tuesday. All of the support I receive from the ladies’ section at Mid-Herts is phenomenal and makes results like these even more special to me and my family.

Following my success at Knebworth, I was honoured to be selected for the Hertfordshire Ladies team to play county match week at Stoke by Nayland from the 17th to the 20th of June. Although the weather was rather unkind (it poured with rain the first two days and led to some rain delays), it was an unforgettable experience. I was able to win 3 of the 4 matches I played, including being able to maintain my 100% winning streak in the singles, and help lead Hertfordshire to victory in the must win final match against Essex. I want to extend my thanks to our fabulous captain Denise Fiori as well as our very own Janet Biscoe who did a fabulous job with the website and updating everyone on the team’s progress. Winning County Match Week was the icing on the cake to my personal victory at Knebworth and gave me a lot of confidence as I went on with my season and started to focus on the National events. Next destination was Royal Troon!

The Scottish Women’s (Helen Holm Trophy) is one of my favourite events of the year and is played at Royal Troon. We were once again blessed with beautiful weather as I started off with my first round on the 29th of June. I struggled with the tricky pothole bunkers and sloping greens shooting +9 for my first round. I was disappointed as I knew I could have produced a much better score that day, with a lot of shots left out on the course. However, I knew that tomorrow would be a new day and that I would need to come out fighting to be in with a chance of passing the cut. Day two was some of the best golf I have played with me shooting level par to pass the cut by two shots. I was extremely proud of myself for battling one of the toughest courses in the world and not letting the pressure of the cut get to me. On the final day I produced a round of +4 with a silly triple bogey on the 17th hole to end the tournament in 46th place. I was very pleased with this performance at such a highly ranked tournament against some of Europe’s best amateur women.

Following a very long road trip back home (I think my poor dad had enough of my music choices by then!) and a few days’ rest, I was ready to play in my next event. The Faldo series event was to be held at Welwyn Garden city for the first two rounds and the third round following a cut at Brocket Hall. My first round proved to be a true test of mental strength as I missed pretty much every fairway off the tee, but thanks to some excellent short game and putting I scored +4. The next round was thankfully a lot calmer off the tee and allowed me to shoot a solid even par to pass the cut by 5 shots. My round at Brocket Hall proved to be one of those rounds that you look back on with the “what could have been” approach. I was -3 through 6 and putting the absolute lights having holed three 30ft putts in a row. However, some more trouble off the tee brought the bogeys knocking and I finished +1. This gave me a top 5 finish and although I may not have been able to pull off the showstopper final round, I am proud of the end result for the tournament.

The next big event to prepare for was the English Women’s Amateur, held at Mooretown Golf Club and Headingly Golf Club from the 27th of July to the 1st of August. I was honoured to have made the field for this event with only the top 84 women in the country being eligible (scratch was the cut off). The first round was anything but straight forward with rain delay and a thunderstorm hitting when I was 6 holes in. The course unfortunately didn’t drain the best and as I was the last group out, we had to sprint the last three holes so we could finish at 9pm in some kind of daylight. I shot +6 and was 2 off the cut at this point, so everything was to play for the next day. Sometimes golf doesn’t go your way, and that’s ok. Day two was one of the hardest days for me this summer. I simply couldn’t get to grips with the course, and the very windy and wet conditions didn’t help ease my case. I shot +13 and missed the cut. I felt this one very hard, as I truly believed on my current form, I would have had a shot at doing quite well, especially since match play tends to be my strength.

I want to thank my parents for their amazing support, especially during that week, as they reminded me that all athletes go through their ups and downs and to use this as motivation to better myself. I truly believe that everything happens for a reason, and that me missing the cut was the best thing to happen as it allowed me play in the Royal Birkdale Ladies Scratch on the 30th of July. This 36-hole event was played as my dad likes to describe in the way “God intended links to be played”. It absolutely poured with rain and the course certainly didn’t fail. Royal Birkdale has to be one of the most beautiful and tactically difficult courses I have ever played. I want to thank Royal Birkdale for their amazing hospitality and for running such an amazing event that promotes excellence in women’s golf. I had a special connection with Birkdale and played out of my skin shooting +4 and -1 to win the Under 21s event as well as placing 8th overall. The highlight of my day would have to be my eagle on the 13th hole, which gave me memories of Spieth’s little adventure on the range in 2017.

This was truly the best way to close out my summer season of 2021 and I cannot wait to get back to Kentucky to play some great college golf now. It has also allowed me to accumulate a World Ranking of 2255th , and I look forward to seeing it improve. I want to finish off by thanking Lindsay Murray-Grey for her amazing work with the Ladies Scratch team, I am looking forward to playing my final match for the year against Brookmans Park this Saturday! I would like to thank Janet Biscoe for all her hard work on the handicap committee and dealing with my tricky score inputs. I am delighted to end the season on +0.4. I would also like to thank Mid-Herts golf club for offering me honorary membership for the upcoming year. I am beyond honoured to be a part of this fantastic club and it am very much looking forward to representing it for many many years to come.